This has been one of the most depressing early springs so far, at least since we moved back to WI. We had a nice little stretch of milder temps about 2 weeks ago that melted most of the snow that had accumulated over winter. Then, last week, we got a nice 9" snowfall to nullify all the snowmelt. Now, we've slowly been getting a couple of degrees warmer each day for the past week or so. I think 45F is the forecast for today. A good chunk of that 9" is about gone, but they're saying maybe an inch or two tonight of slushy snow, which should melt during the day tomorrow, but the major depressing point is a big low-pressure system forecasted to come through early next week. The different forecast models are not in agreement of the path this cyclone will take, but the further south it is, the more of a chance of us seeing snow. If it takes the most southerly route, they're saying we could see a signifcant snowfall. This is really depressing. Another big snow means it'll be that much longer until I can move my plants outside - as snow melts, and in turn evaporates, it sucks up a lot of heat energy from the air, which means temps will stay low, this also keeps the ground a lot colder, and so on. It doesn't start warming up too much here until the snow melts and the ground dries up. Due to the angle of the sun, my garage is getting fairly mild now, despite low temps at night still in the upper teens/low 20's, my minibogs have remained thawed, and it warms up probably into the 50's during the day. So I've actually been seeing a few flower buds getting ready to emerge. I'm also seeing some saprophytic fungi develop, which is always an issue this time of year. Conditions are perfect for it in the garage now - low light and milder temps. This is usually when I move them outside, which pretty much eliminates the fungi, but it is still too cold at night. So, I just hope this turns out to be a rain, or mostly rain event next week. If so, it should melt any remaining snow, and allow temps to finally start moderating.

I visited the greenhouse, briefly, earlier this week, to check on the aphid situation, and was happy to see that there are very few remaining. That insecticide I used was awesome! I will try and get in this weekend and take some pics, some of the plants are looking pretty good. I noticed a couple of huge 'Doreen's Colossus' pitchers, that, unfortunately, are a bit malformed from the aphids, I presume. I can see why the plant got that name though. Wow! I also need to start repotting this years new seedlings, some are getting pretty crowded.
Posted by Aaron at 10:51 AM No comments:

I've been to the greenhouse twice in the past week, which is probably a record for me. Since moving the plants into the greenhouse, I've been noticing a slowly increasing aphid population. I've kind of not thought to much about it, because I've never really had any bug problems before. Well, my trip to the greenhouse last weekend exposed me to a pretty sizable aphid population on many plants. Some developing pitchers were nearly completely covered. So I ran out and got a topical/systemic insecticide and let 'em have it. I visited again last night (2 days later) to check on things. Definitely less aphids now, but there are still some isolated pockets of resistance. Here's a pic I took last night of one of those isolated pockets of resistance: 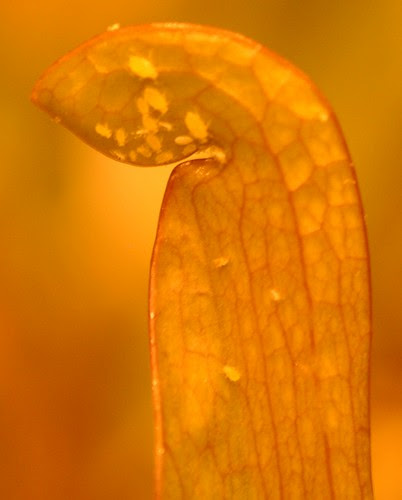 I should mention the light looks weird because of the greenhouse lights that were on (I was there at night), and I could not figure out how to get my camera's flash to fire while in the light.

I also had to add more material to the compost bin, several plants had died at some point over the past couple of weeks. I really don't know what the problem could be. Most plants look pretty good, and some that look good, don't by the next week. One of the casualties was the open-pollinated oreophila x willisii that just flowered (at 3 years old) that I mentioned in a previous post. What a bummer. I did learn that the misting system in the greenhouse uses tap water. All this time I thought it was RO water, but my wife said the powers-that-be decided not to allocate funds to an RO system, during the planning phases of the greenhouse. Perhaps that is the reason for the casualties. Next year, I will put the plants in the "cool room" of the greenhouse, which uses the misters a lot less often.

To end, here a few pics of some of this years seedlings, most about 3 months old now. 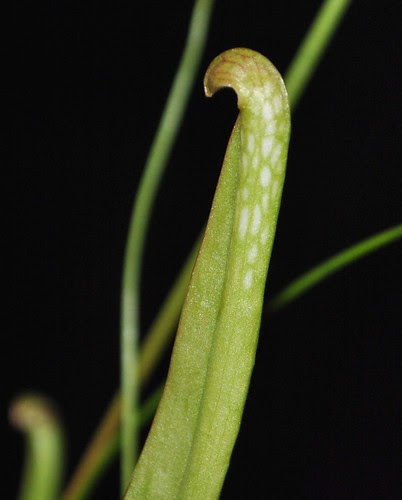 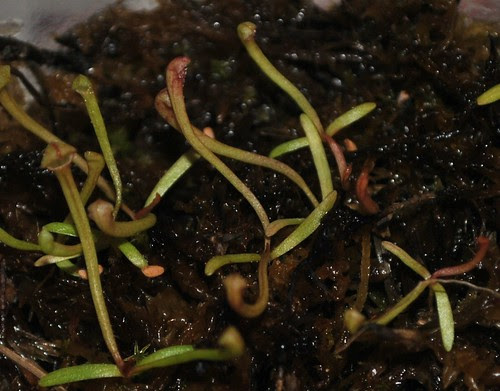 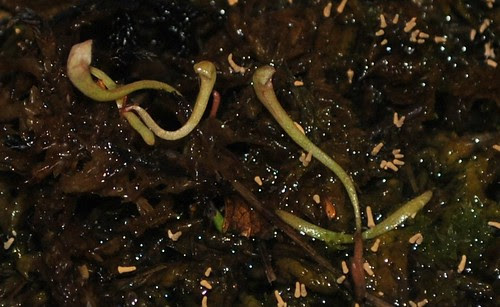 S. oreophila x 'Toadmaster'. I posted a pic of these in a previous post, right when they first germinated.
Posted by Aaron at 6:33 AM No comments:

It has been too long since I've been to the greenhouse. Starting to worry a bit about the seedlings, as there is no one watching over them. There are all mostly covered, but I've had to water some of them a little, from time to time. Mainly, I've been sick as a dog for the past week. I was starting to feel the onset of a cold late last week, and then last Saturday, we (the fam) headed to Madison, WI, to participate in the workers protests going on there. So I was outside all day, in a steady snow and about 28 degrees. Needless to say, by Sunday morning I was in misery, and continued to be all week, and still am, a little, although I definitely feel much better. To top it off, my wife has temporarily misplaced her swipe-card to get into the greenhouse, so I don't know when I'll get there.
As it is March, temps should finally start trending ever-so-slowly upwards. We're forecasted to get a major snowstorm next week, so winter is definitely gonna be here for awhile yet, but the long-term models show a warming trend is coming. Which means I need to start dividing the stuff that's in my garage. So far, everything still looks alive in there, but I've learned that doesn't mean anything. Every garage-wintered plant I've lost looked fine until I moved it outside, at which point it turned to mush in a matter of days. So I'm hoping that I can move everything outside by early April and have stuff divided a week or two before that. My only fear is losing flowers to frosts, which can occur up through mid/late May, although it's pretty rare to get one after the middle of May.
Posted by Aaron at 1:46 PM 1 comment: