Purchased this plant roughly a month ago and it recently sent up a very large pitcher. I think it's a really nice plant! 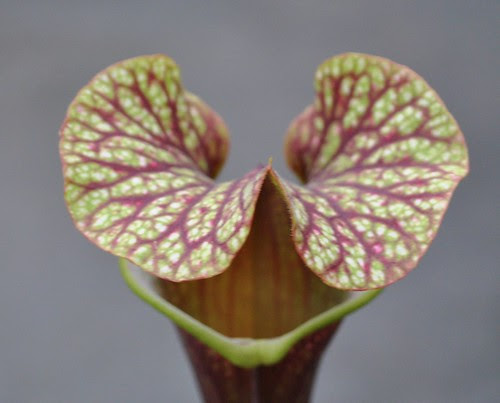 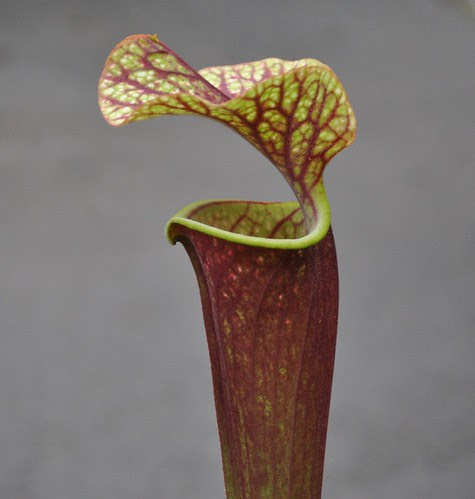 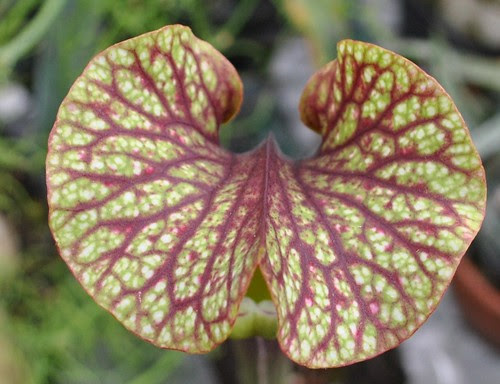 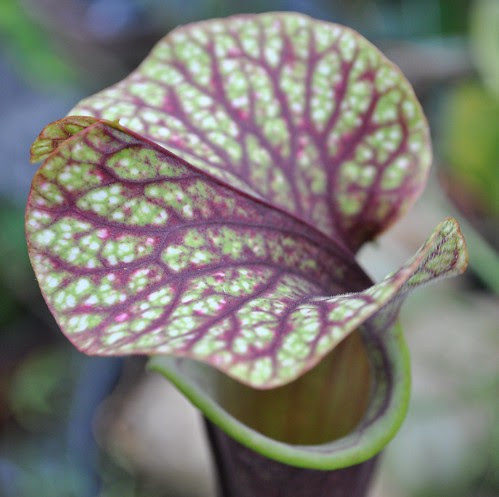 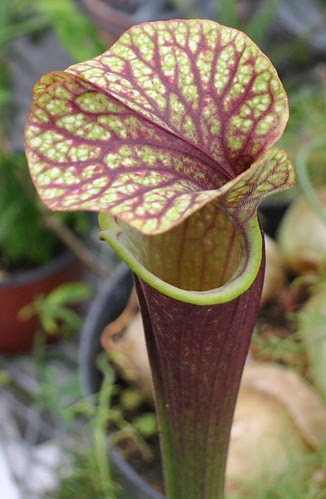 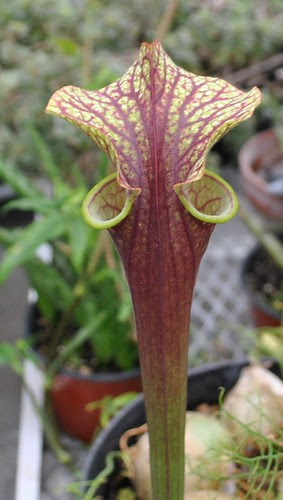 Lastly, here are some 4-month-old seedlings from a cross I did last year. The father is 'Judith Hindle', the mother is [readii x (catesbaei x flava)]. These particular seedlings are probably showing the most color of all the ones that sprouted this year: 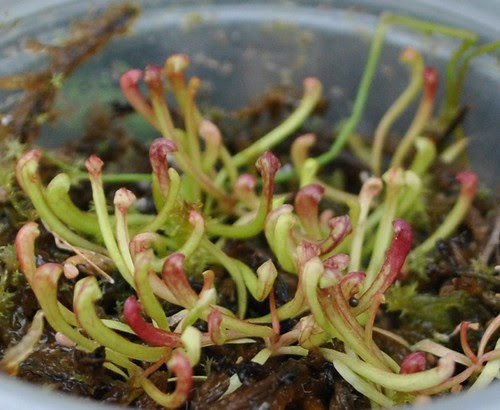 After hitting close to 80 degrees 8 days ago, I awoke Sat. morning to a thin layer of snow that fell overnight. I'm hoping the flower buds survive, it didn't get that cold (around 30F), it seems the flower buds are reasonably cold hardy as long as they haven't emerged too far. I covered my plants with a tarp Sat. night, and moved some in to the garage, as it the temps sunk into the upper 20's, combined with 30 mph winds. Now, we have a winter storm watch for tomorrow night/Wed. Right now, they're saying 6" of snow, but the track of the system still has some uncertainty. I know this isn't unusual for April in WI, but it isn't that often we get this kind of weather at this point in the year. All I can say, is it better be in the 70's every day in May, or I'm gonna take a hostage. 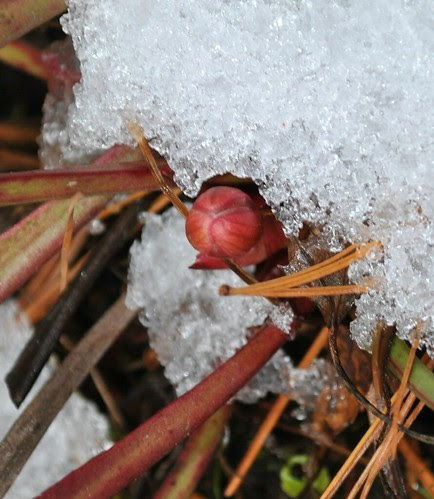 Well, after a week or so of abnormally warm weather - we were in the 70's this past Sunday - the old man is deciding to come back for a visit. Forecasted lows for this weekend are in the upper 20's/low 30's, along with a weather system that will include a lot of wind and some rain/snow mixtures. We could get an inch or two, but I wonder how much will actually stick, considering the ground has warmed up a bit. This wouldn't be too terrible, but our warm spell has awoken with a bang many of my outdoor Sarracenia. I'm starting to see several flower buds emerging, and even a x catesbaei whose flower bud is about 2" tall now. that guy is always the first to flower. i'm also seeing some new pitchers starting to shoot up too. Past experiences have shown that freezing temps alone won't do any harm at this time of year, however, combining that with the wind we're supposed to get, that's what can kill off any emerging flower buds. At this point, I really don't want to drag everything back into the garage, so I may use a tarp or large sheet of plastic and try to cover everything at night.
I did not, nor have I yet, gotten around to dividing any plants. The warm weather this past weekend, combined with some unexpected company, led me to do a bunch of geocaching this past weekend, a family activity we've been itching to do as soon as the weather turned nice. So I'm shooting for sometime next week now, as I don't want to do it in the cold. I do have peat prepared for the divisions though!
Posted by Aaron at 8:18 PM No comments:

The End of Winter

Well, I finally moved all of my plants back outside last night. That's always a good feeling. We've been having some real nice weather so far this week, and it looks to continue. I even see some forecasted highs in the 60's this weekend, along with some rain. Can't ask for more than that. It's only April in WI though, so below freezing temps and snow can't be ruled out for another 6 weeks or so, but if/when it does happen, it should be brief. I did notice an S. rubra with a flower bud already starting to emerge. Hopefully that's the first of many. I noticed one of the growth points on a 'Gin Goblin' that is especially swollen, like near golf-ball size, I wonder if that will bloom this year? There are a few plants that have a surface covering of some kind of fungus growing on them, so I will have to watch that. Mostly, it occurs when the garage warms up in the spring, along with the very little light in there. It usually disappears when I move them outside. I did do a lot of dead foliage trimming in early winter, but I can see another round of that is in order. Anyway, looks like some awesome weather this weekend to sit on my back deck and divide some Sarracenia. I just have to get some peat prepared this week for it. At this point, I have no idea what I'll have, but if there's anyone out there looking to trade, let me know.
Posted by Aaron at 10:25 AM No comments:

Well, decent by the fact there's some decent growth occurring in the greenhouse. Sure enough, the morning I go to the greenhouse to take pics, it's very cloudy and rather dark in the greenhouse. The shots didn't turn out too bad, but it would've been nice to have some direct sunlight. It seems that's the only way I can get crisp photos with our camera. Anyway, a brief weather update. The snow that was being discussed has now been almost completely removed from the forecast, we're supposed to get some, mixed with rain, overnight and in the morning, but accumulations are expected to be minimal. After that, it looks like some slightly above average temps are moving in. The low on Monday night says 26F, after that, the lows are above freezing for the long term forecast, so my plan is to move the plants out of my garage on Tuesday, and hopefully get to dividing them this upcoming weekend. Now, onto the pics: 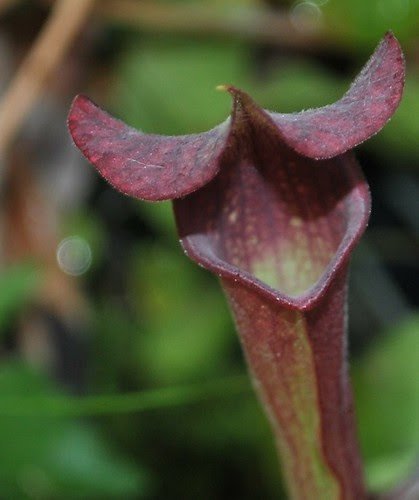 This is 'Odyssey' x leucophylla, a plant I picked up at Oudean's Willow Creek Nursery last May. 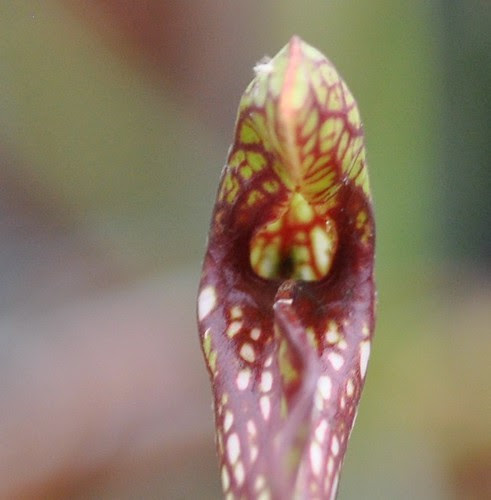 This is one of many open-pollinated 'Boob Tube' seedlings I have. I have some from my own 'Boob Tube' that are about 4-years-old now, and then another group of seeds that I got from Wes Buckner, and those are all 1-year-old now. This particular one looks very psittacina-esque, and is from the Wes Buckner batch. Most of the ones from his seeds are very psittacina-esque, whereas the ones from mine are more upright.

Speaking of my open-pollinated 'Boob Tube' seedlings, here is one of the 4-year-olds. Actually, very reminiscent of the pod parent. The pic doesn't show it, but the pitchers on this plant all stick out at about a 45 deg. angle and have a snake-like appearance. This particular pitcher is about 12" long, so I can't wait to have a whole mess of them opened up. 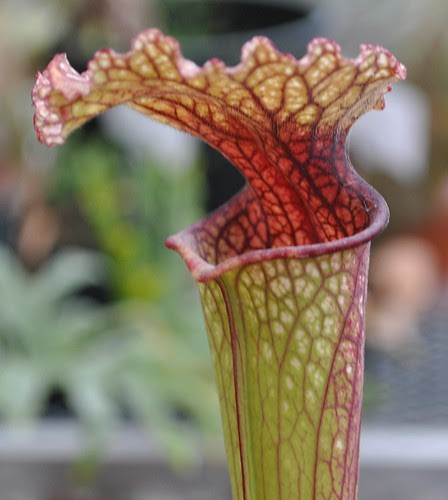 This is a leucophylla x flava rubricorpora hybrid, also aquired at Oudean's. I was there in early May, so there wasn't a whole lot of growth yet on any of her outdoor plants, so I was kind of just going on the tags when I picked plants out. I'm pleasantly surprised with how this one looks. Can't wait to see it when I move it outside into full sun. I've mentioned it before, but whoever designed the greenhouse didn't take into consideration sunlight angles and whatnot. The greenhouse doesn't get a whole lot of direct sun. 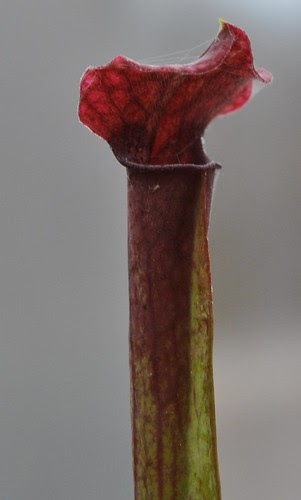 This is another 1-year-old from seeds I got from Wes B. This particular one is mitchelliana x 'Wilkerson's Red'. I'm liking the color development on this one, especially considering the sunlight levels in the greenhouse. Can't wait to see this one after a summer on my back deck. I actually had about 18 or so siblings of this plant, but the winter has not been kind and I'm probably down to about 8 or so. 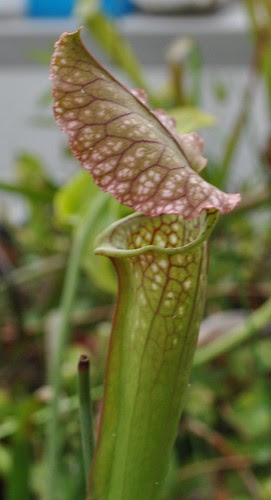 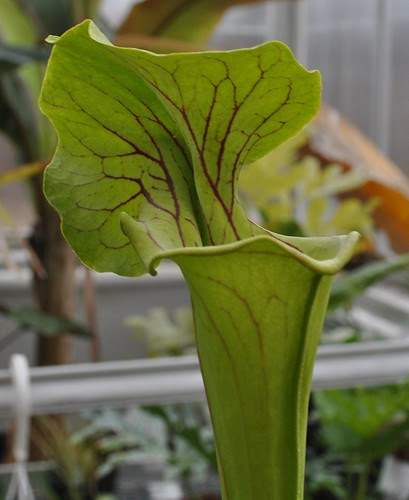 Another one I picked up at Oudean's - 'Doreen's Colossus'. It's too bad the aphids picked on this one earlier, leading to the distorted appearance. I should've included my hand in the photo. These pitchers are enormous. 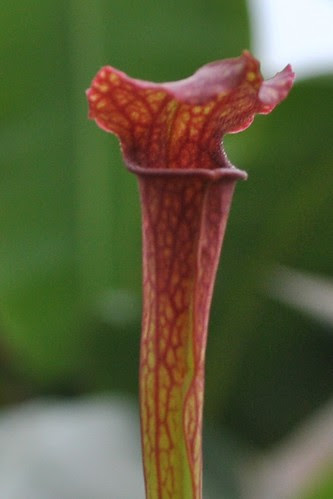 Another 1-year-old from Wes B's seeds. This is 'willisii' x leucophylla. I know there's some controversy over S. 'willisii', and I don't know if he had a true willisii when he did this cross or what. I do have a lot of siblings of this, and they all more or less look like this. This is an unknown hybrid at 4 years old. For years, any flowers I didn't use in crosses, I just left to mother nature, and would put all of the seeds in one container, mix it up good, and plant some every year. This is one of those. It looks pretty close to a S. flava cuprea, but, it's hard to see in the photo, but there are a lot of small translucent spots on the lid and around the opening. They don't really look like the ones you see on S. leucophylla, more like the ones you sometimes see on S. alabamensis. I know I used to have a flowering flava cuprea, but never a flowering alabamensis. So I really don't know what this could have in it. Certainly looks like a flava x rubra hybrid. I'm still waiting for it to flower to maybe help clue me in. 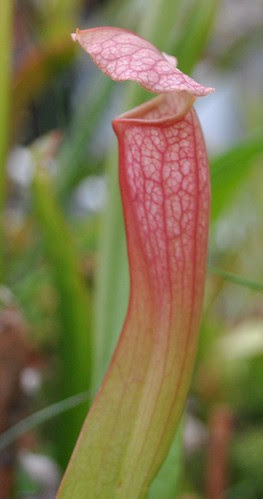 This is another unknown from the same batch of seeds mentioned in the above pic. No clue what this could all have in it, besides S. leucophylla. Perhaps some S. purp and maybe even S. minor. What's interesting, is I don't think I've had a flowering leucophylla until a year or two ago, and this plant is 4-years-old, so the leucophylla influence would have to be from a leuco hybrid. It is a pretty plant, with the pink coloration and all the white spots, however, it is fairly floppy, and a decent rainstorm will knock over most of the pitchers. 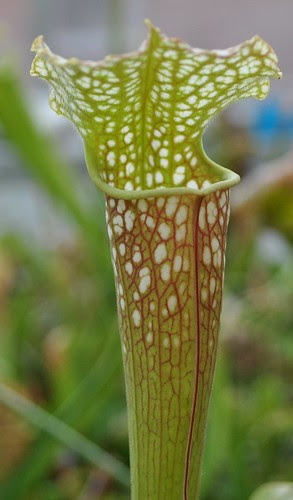 This is 'John Wyndham', a cross of (leucophylla x minor) x leucophylla 'Hurricane Creek White'. I bought this from CA Carnivores last spring, and it pretty much did nothing last year, any new pitchers were no bigger than the ones it had when it arrived. This is its first pitcher this year and it is 15" tall, so I'm curious to see how this one looks by then end of summer. It's also another one the aphids especially liked, judging by the sort of misshapen look to it.
Posted by Aaron at 11:49 AM No comments: