Paid a visit to the greenhouse this past weekend and was amazed at what I saw. First, I noticed the first seeds are beginning to sprout. S. oreophila x "Toadmaster" is the first out of the gate: 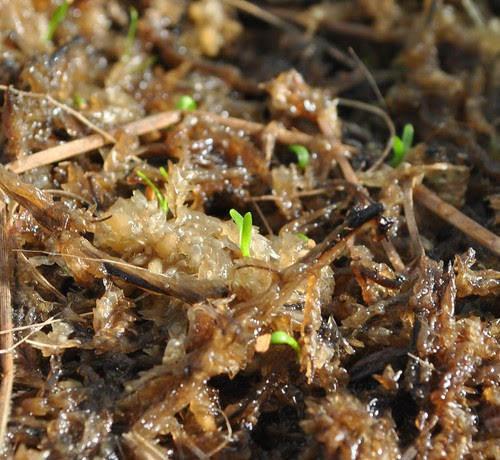 Second, many of the one year old plants have sent up new growth, even ones that appeared to be dead: 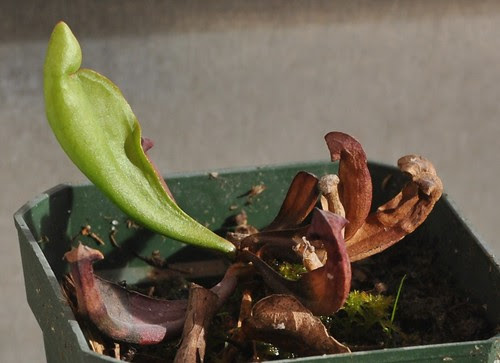 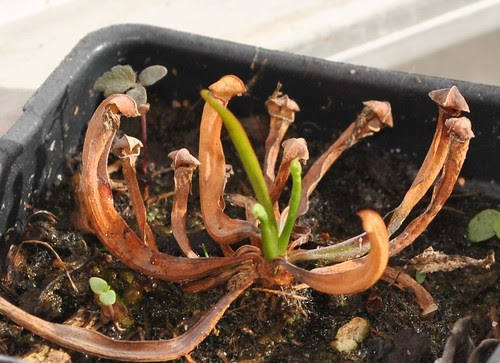 There are definitely many that I'm about to give up on. It seems the ones that suffered most were the second "batch" that sprouted last year. I had basically 2 batches of seeds that were sown. The first batch sprouted around Christmas of 2009, and the second batch sprouted in early spring of 2010. I will definitely be more careful with this year's batch of seedlings.

Third, I noticed a flower on a seed-grown plant, 3 years and 1 month after it germinated. It is an open-pollinated S. oreophila x willisii: 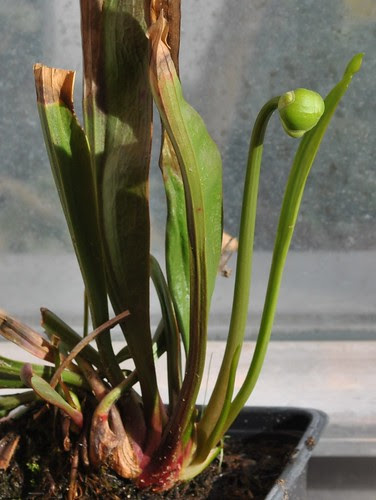 Lastly, I noticed a bunch of flowers emerging on some older plants, including many that I purchased at Oudean's Willow Creek Nursery last May, including 'Doreen's Colossus' and 'Tapestry' (what a nice cross that would make): 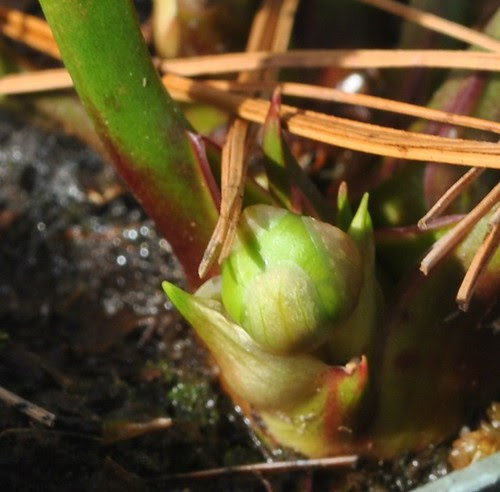 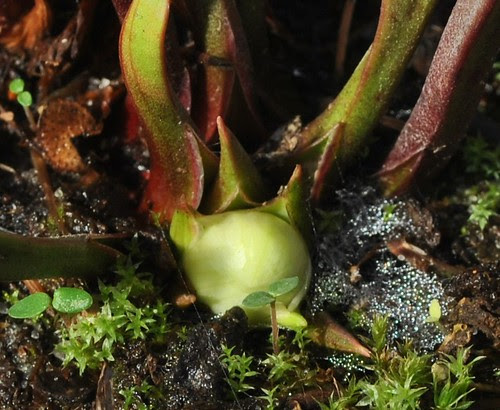 One last shot, of an unknown S. purpurea hybrid that kind of sums up how things are looking in the greenhouse. It shows a new pitcher emerging, as well as some Drosera filiformis waking up, as well as some weedy white violets, that I've given up on trying to eliminate: 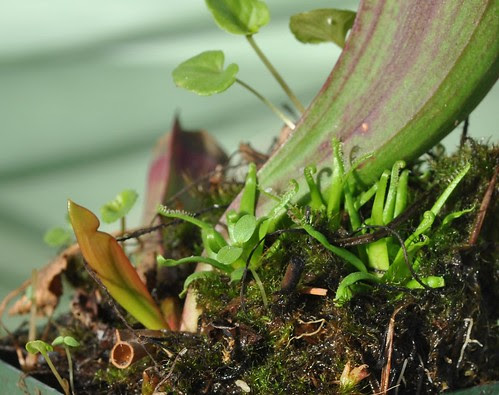 Paid a visit to the greenhouse this morning, where all of my younger plants were moved recently. I also dropped off the rest of my seeds that were in cold stratification. I obseverd a lot of new growth on seedlings from last year, although there are still a good number that pretty much look dead. I'll keep them in there and hope for the best, but I don't feel too confident they are still alive. There are enough showing new growth that I don't feel too upset about it, but I definitely learned a lesson on seedlings this year. Some of the older (2-3 year old) seedlings are also waking up, and I even observed a flower bud, about 2" tall now, on a 3-year-old open-pollinated oreophila x willisii. Unfortunately, there will be nothing to cross it with, other than itself. So maybe someday I'll have some self-pollinated open-pollinated oreophila x willisii. Something to look forward to years from now.
I also checked on the seeds I had moved in there a little while ago. I don't remember the date off hand, but I did observe some germination! The first to sprout this year are a cross of S. oreophila x 'Toadmaster', which I got off Ebay. They just very recently sprouted, as there are no cotyledons visible yet, just the root shoots curved into the soil. I also observed one seed of S. flava x 'Medusa' just beginning to sprout. Hopefully, the rest of its siblings soon follow suit. The other two sets of seeds that were brought into the greenhouse with them show no signs of anything yet, but I will definitely be increasing the frequency of my visits now.
I still am meaning to get in there and divide some of the older seedlings that have multiple growth points, but life has just been too busy with the holidays, plus a death in the family, so I haven't really had much time to do anything. Hopefully things settle down now.
Posted by Aaron at 8:15 AM No comments:

2011 has begun, although this is generally a slow time of year. A long stretch of bitter cold froze everything in the garage, although some milder weather moved in over the past week and a half and thawed everything out. I finally moved 3 trays of first-year seedlings into the greenhouse about a week before Christmas. I moved another two trays today, and noticed a few of the ones that got moved in before Christmas starting to send up new pitchers. I probably should've moved everything in sooner, as I don't think first-year seedlings can take freezing too well, but so far, just about everything at least looks like it's still alive. A few seedlings look like they may have perished, but I'm not counting them out yet. One of the seedlings showing some new growth looked like it was dead to me, but low-and-behold, there's a new shoot. I also moved some seeds from stratification into the greenhouse, they were put into stratification around the 20th of November. I'll be moving more into the greenhouse, in batches, during the coming weeks, as they were put into stratification in batches up to about mid-December. I also have another couple of trays of younger plants that will go into the greenhouse soon.
During the past week I finished trimming off the rest of my plants and noticed several 3-year-old plants that can definitely be divided. I was actually amazed how well-developed the rhizomes are on some of them. I will be watching closely over the next few weeks, as they get moved into the greenhouse, to see if any flowers develop on these youngsters, as I had one plant from this cohort bloom this past fall.
Posted by Aaron at 3:32 PM No comments: