After a lazy day, I finally made my way outside in the evening to grill dinner and have a couple Mooseheads and thought it was perfect lighting conditions to take some pics:

This is a shot looking downward on my largest minibog, with several 'Tarnok' flowers on the left. The large pitcher opening up on the right is a leucophylla x flava rugelli.

Another perspective, with my daughter's tricycle as an accent.

S. oreophila x psittacina. An old plant I got from Cook's many years ago, possibly when I lived in Missouri, which would be at least as far back as 2002, but I really don't remember. This is a fairly typical pitcher shape for primary hybrids between S. psittacina and upright species. On this particular plant, some pitchers will have the hoods actually expand and flatten out, some will stay like this, and others will remain closed, with only the smallest of pitcher entrances.

This is actually a developing flower stalk of the grass pink orchid (Calopogon tuberosus). I purchased the bulbs from Meadowview last spring. I was wondering if they'd even survive the winter in my garage, but they did, although they were very slow to emerge this spring, and at one point I thought they likely perished. At one point I dug into the minibog where I thought one was planted, and sure enough, I found the bulb with a 1 cm shoot emerging from it. Of course, we will be out of town for nearly a week in early July, just when this guy should be in bloom. They do have a drawn out blooming period - 1 flower at a time - so I should be able to see some of them, hopefully.

A rear shot of the pitcher of an open-pollinated 'Boob Tube'. This one is 3 yrs old now, from seed and sent up 2 flowers. The first one is already done, the 2nd has yet to open. I didn't get a pic of the first flower, but it was interesting. The petal color was pink, but the petals were tiny, no more than 1/2 inch long. I'm not sure if that's a genetic expression, or some environmental factor. I'll be keeping my eye on the next one.

Another 3 yr old from seed - an open-pollinated oreophila x willisii. This one has sent up some large pitchers this spring, but no flowers. The coloration is similar to its mom, but the pitchers look more like a pure S. oreophila. Here's a pic of the mother plant, taken last year in early June:

This is an open-pollinated 'Ladies In Waiting'. This one is sort of reminiscent of 'Ladies in Waiting', but with a slightly different hood shape and a little more subtle coloration. Here's a pic of mom:

a group shot taken from ground level on my deck

A shot of a minibog I just put together this year, with a bunch of purpurea hybrids that were struggling in the greenhouse. We were gone for 4 days this past week, and apparently we got a nice amount of rain, and I got this reminder that I forgot to drill some drainage holes in the tub.`

Another open-pollinatd 3 yr old from seed, the mother plant being an (oreophila x flava) x leucophylla. This one has some really nice white coloration on it and I can't wait to see the late summer pitchers, well, maybe I can, because I don't want summer to end.

This is (oreophila x flava) x leucophylla, and is the mother plant of the previous plant. This one is in the process of opening up for dinner.

Sadly, I've lost probably 85% of the seedlings that would be entering their 2nd year now, due to the issues in the greenhouse I've previously mentioned. This is probably the most promising-looking of the survivors, although many are still in recovery mode. It's a mitchelliana x 'Wilkerson's Red', a cross by Wes Buckner.

Another open-pollinated 3 year old from seed, the mother plant is alata x flava. I have at least 3 or 4 siblings from this seed pod, 2 turn a dark red color (this being one of them), the other 2 are a little different and I'm waiting for some decent pitchers to get some pictures. I still have the mother plant, but it has not been growing well for the past couple years and is just putting up seedling-size pitchers. It's in an older minibog that is in definite need of TLC. It was on my to-do list this spring, but I never got around to it. Here's a pic of mom from a few years ago:

Still have some flowers in bloom, and even a few that have yet to open, and I actually noticed one flower bud just beginning to emerge on one plant. Anyways, these are from a plant going by the name of "Bug Pipes", although I don't think it was ever officially registered. The plant originated from wild-collected seed (not by me - I don't know who, but it would've been many, many years ago), and it was collected from a Sarracenia minor. Subsequent growing of the seeds revealed that the flower the seeds came from had been cross-pollinated by a S. psittacina, based on the appearance of the pitchers. I originally obtained this plant in 2003, from David Crump in Charlotte, NC, while visiting his place. The plant died after the first or second Wisconsin winter, but I obtained another last year, and it rewarded me with 3 flowers this year.

An unknown hybrid, most likely purpurea x flava, received in a grab bag from Lois Ochs. This one has 3 of the probably 10000 of these beetles that go rampant in our backyard every summer. Man, I hate them. They chew up a lot of plants in our garden and they are putting on PDA's all the time. At least they leave the Sarracenia alone, only giving them an occasional meal.

A big Baptisia shrub that grows in front of our back deck. It blooms when the Sarracenia are starting to wind down, and makes a nice composition. The hummingbirds seem to like it, although it's not what you normally consider to be a hummingbird plant. It's in the pea family. One of these days I would like to get a pic of the hummer feeding on it. I like to think it would be the only photo in existence to have a Baptisia, a hummingbird and a pitcher plant.

Lastly, a pic of a crane fly feeding on the nectar on a 'Hummer's Okee Classic'. From other pics I've seen of this plant, I really like it, but it seems every single pitcher this thing produces for me ends up misshapen in some way. I'm still waiting for a perfect pitcher.
Posted by Aaron at 5:56 PM No comments:

Flowers Up The You-Know-What

The pitcher plants are in full swing, as far as flowering goes. I'm probably around the halfway point, as far as number of flowers that have opened vs. the number that have yet to open. We had a few days of really hot (97F) weather, coupled with very strong sustained winds. I have no idea what kind of effect that is going to have on the crosses I did. It seems 3 days of strong, sustained winds would stir up a lot of the pollen in the flowers and lead to at least some self-pollination, if not cross-pollination. Oh well, I've still been out every day doing my own cross-pollinations. I'll post a complete list when all is said and done, and I'm probably at around 15 right now. Anyway, on to some flower pics: 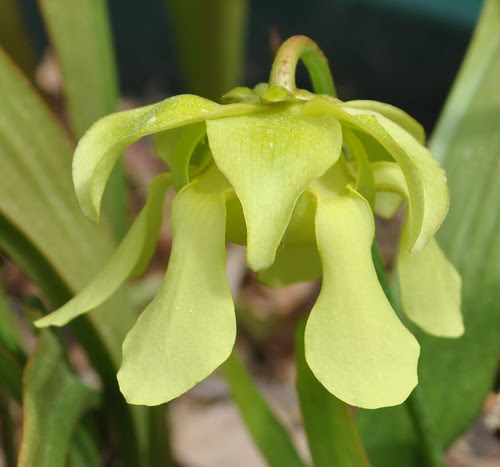 This is from an unknown hybrid I received from Lois Ochs a year ago, as part of a "grab bag". It is some kind of S. minor hybrid, and based on the flower color, I would guess it's something like S. minor x alata, although it could be something more complex than that. I pollinated it with an open-pollinated alata x flava, which produces mostly all-dark red pitchers.

These are flowers from 'Fireworks', which is also called 'White Sparkler'. I pollinated one of the flowers with S. oreophila. The other just opened today, so I haven't decided what to do with it yet. I've also used it to pollinate a leucophylla x (leucophylla x flava) and 'Snowflake'. 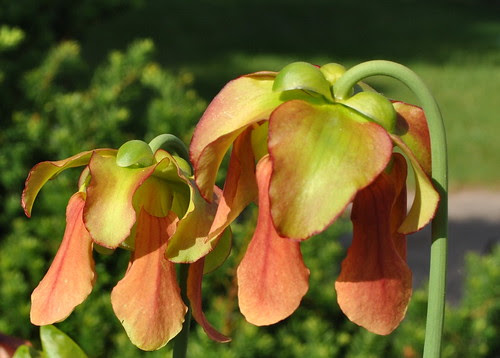 Speaking of 'Snowflake', here are its flowers. I have 5 all together, with a couple yet to open, I will have a lot of 'Snowflake' crosses this year. Besides the cross with 'Fireworks', one flower was pollinated with an unknown (probably a moorei), and one with oreophila, and has been used as a pollen donor so far on leucophylla x (leucophylla x flava), an unknown flava hybrid, and an anthocyanin-free purpurea x jonesii.

This nice large pink flower is S. oreophila x purpurea. I've been excited to use this in some crosses, as it produces some very large, heavily veined pitchers. I have yet to pollinate it yet (i will starting tonight), but I've used it to pollinate an oreophila x 'willisii'.

This is the open-pollinated alata x flava mentioned previously. This is flowering for the first time, at 3 yrs from seed. I also have a sibling of it that is about to open its flower. Both produce tall, all-red plants that turn nearly black after a few weeks in the sun. I'm excited to cross these too. The one that is open now has been pollinated by 'Fireworks', and used to pollinate oreophila, 'Godzuki', and the unknown minor hybrid shown above. I'm hoping to use its sibling in a cross with 'Red Sumatra' - that should produce some striking red-pitchered plants.

This is S. x 'Medusa', a plant from Sarracenia Northwest. I have no idea what the parents of this plant could be, other than it does show some S. rubra characteristics - namely weak, floppy spring pitchers followed by stronger, upright late summer pitchers. I've used this to pollinate 'Godzuki' and oreophila x willisii, but never got around to pollinating it with anything. So it will be another open-pollination.

Lastly, this is another plant I raised from seed that is flowering for the first time, at 3 yrs of age. It is an open-pollinated leucophylla x moorei. The flower is kind of deformed for some reason, so I decided to not use it in any crosses, and we'll just see if it ends up with any seeds. It's not the greatest looking plant, mainly just tall green pitchers with slight colorations, but being seed-grown, it'll always have a place in my heart.

As I said earlier, the string of hot, windy weather really took a toll as far as watering is concerned. It kind of came out of nowhere and wasn't really forecasted until a day or two before it happened. We had a cool, wet spring, and I really hadn't had to water any of the minibogs at all until this week, and of course, I didn't stock up on water beforehand. So things really got dry, and I actually lost the flowers on 1 plant (BobZ hybrid H2), that was the only casualty though. Even now, the soil in all the minibogs are very dry, all live sphagnum has gone dormant, I've been able to basically just keep things moist enough to prevent wilting. What made things worse was a couple of nights of forecasted rain that didn't pan out. It's supposed to be a cold, rainy day tomorrow, which I'm actually hoping comes true, at least the rain part of it.
Posted by Aaron at 3:35 PM No comments: